Short answer: one which focuses on awareness and development of how we are as people through the body.

Long answer: I’ve seen some confusion as to what this word “embodied” means in several yoga forums lately, understandable as it’s used differently by different people and has become a bit of a buzzword (irritatingly to those of us working sincerely in the field for some years, as well as everyone else!). I’ve even seen a freakin' make-up brand using the term!

Some use the term synonymously with “mindful” meaning simply a yoga practice which pays attention to the body. I understand why traditionalists may therefore scoff at this saying the word isn’t necessary! I’d argue that with the amount of merely bodily/athletic practice called yoga that exists now, even this limited use of “embodied” is meaningful. It also indicates the importance of not trying to “spiritually bypass” the body, a tendency in some forms of more esoteric practice.

I’d argue an “embodied” yoga is more than this however but one which takes the perspective that yoga can be used to become aware of, and build, our way of being. That’s the critical bit. Embodiment can be defined as the bodily aspect of who and how we are, and yoga both points to, and impacts this. While this may be implicit in much yoga, some teachers have their focus on this. An embodied yoga sees the body as not just a brain taxi, or as something to be transcended, but as an integral aspect of how we exist. In this sense, beyond the buzzword craze, an embodied approach is essentially pragmatic as it concerns how we work, communicate, parent, make love, etc. Personally I’ve used this approach with some very practical people such as activists, business leaders, single mums, police, military etc.

A modern embodied approach (the term does have an older Sanskrit equivalent for those interested) also usually incorporates insights and practices from other embodied disciplines from east and west. These include body psychotherapy, dance (from conscious dance practice likes 5Rythms to partner dances like tango), bodywork (e.g. massage, Alexander Technique, Feldenkrais), martial arts (aikido particularly) and even improv and theatre. These perspectives massively enrich postural yoga which while a broad church usually doesn’t stress such things as emotional expression, shadow work, trauma awareness, humour, or even social interaction...and some may argue has problems as a result!

I’ve noted that some “traditional” yoga teachers find this new cross fertilisation somewhat threatening as they realise they’ve invested a lifetime studying what becomes merely part of the bodily picture. Many however seem open minded and happily I actually see yoga being somewhat reborn in the West with this perspective. Maybe that’s a bit grand...but certainly being developed in creative ways.

“Embodied yoga” can also refer to specific styles such as Embodied Flow (I hear good things) Embodied Yin from Scandinavia (recommend), and Embodied Yoga Principles which - full disclosure - I founded.

I hope this offering is useful, I know there are diverse uses of the word embodiment and I’d welcome other embodied practitioners perspectives. In a way it’s all like trying to explain architecture by dancing to steal a phrase, as embodiment is by definition about subjective experience… but I hope this goes some way! 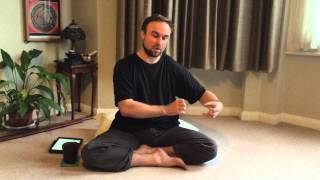